Ecosystem-based aquaculture: We need to stop thinking about an aquaculture farm as something within the limits of a few buoys or GPS coordinates on a map

Editor’s note: Thierry Chopin is a professor of marine biology and director of the Seaweed and Integrated Multi-Trophic Aquaculture Research Laboratory at the University of New Brunswick in Canada. He is also president of Chopin Coastal Health Solutions Inc. His research focuses on the ecophysiology/biochemistry/cultivation of seaweeds and the development of Integrated Multi-Trophic Aquaculture (IMTA) for environmental sustainability, economic stability, and societal acceptability.

The Skimmer: Can you tell us a little bit about what IMTA is?

Chopin: With IMTA, farmers cultivate species from different trophic levels and with complementary ecosystem functions in proximity. They combine fed species (e.g., finfish that need to be provided with feed) with extractive species (e.g., seaweeds, aquatic plants, shellfish, and other invertebrates that extract their food from the environment) to take advantage of synergistic interactions among them. In these systems, biomitigation operates as part of a circular economy (i.e., nutrients are no longer considered wastes or by-products of one species, but instead are co-products for the other species). 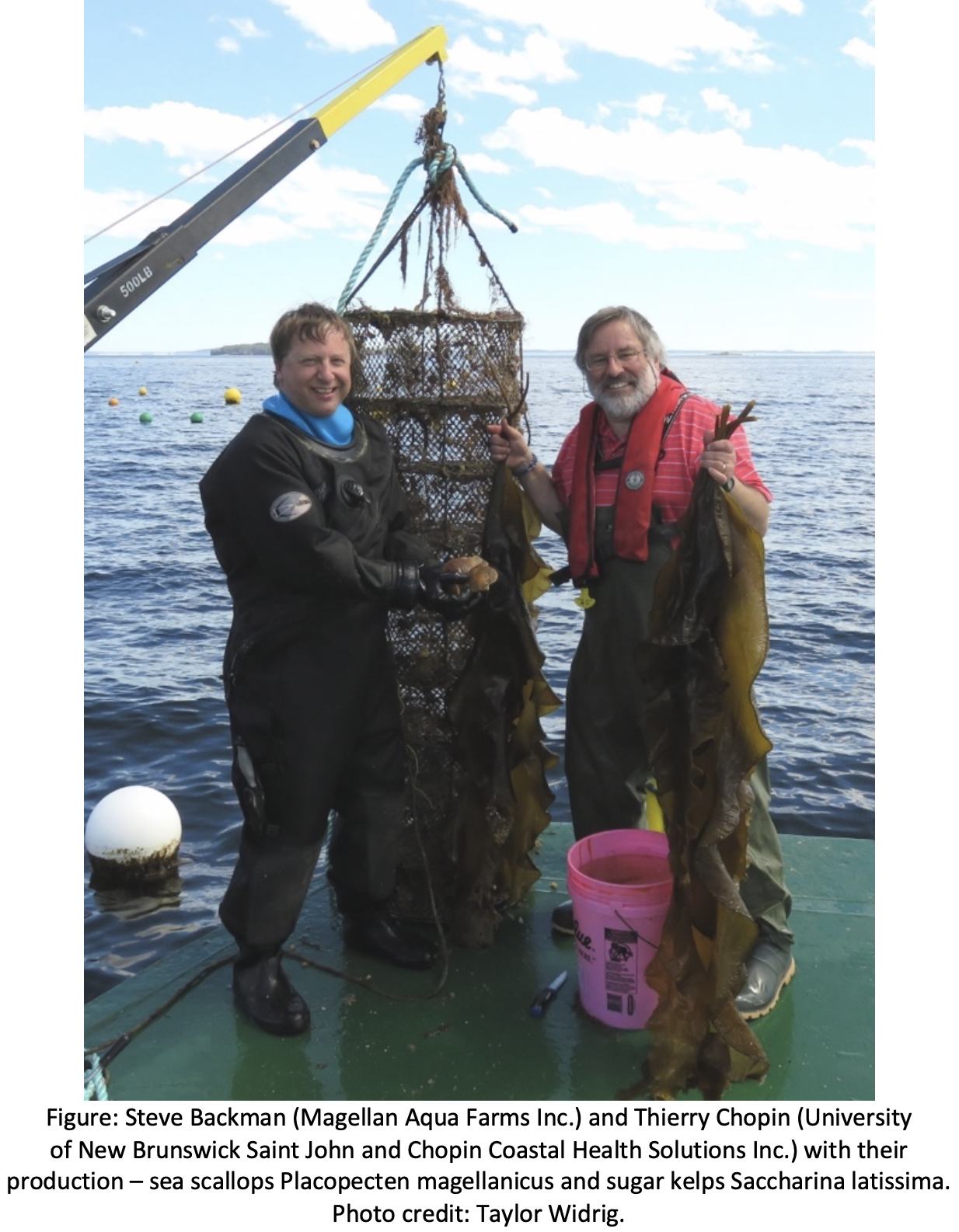 The scope of the IMTA concept is extremely broad and flexible and is always evolving. IMTA can be applied worldwide to open-water and land-based systems, marine and freshwater systems, and temperate and tropical systems. Consequently, it can’t be reduced to a short bureaucratic definition indicating species, type of infrastructures, number of infrastructures, distances, etc. Its versatility is remarkable.

IMTA’s ultimate aim is to ecologically engineer a whole new era of aquaculture systems that:

The Skimmer: Can you describe how widespread IMTA is and what an IMTA setup might look like?

Chopin: Asian countries such as China have a long IMTA tradition (although their systems are not always described using this acronym), and IMTA operations cover vast dedicated areas.

On the other hand, western world research groups working on IMTA have spent the past 2-3 decades developing small-scale, mostly pre-commercial, IMTA operations by modifying relatively small finfish sites to co-cultivate invertebrates and seaweeds.[i] Commercial scaling-up has been difficult because while the biological and environmental advantages of IMTA are generally accepted, there are significant economic and regulatory adoption barriers.

In Canada, we got started with the cultivation of salmon, kelps, and blue mussels within existing finfish aquaculture sites because this enabled us to conduct experiments at sea (as opposed to in the laboratory in small tanks) within the limitations of the regulatory system that was in place. But IMTA was never conceived to be just this setup, and it must be stressed that there is no one IMTA system to feed the world. Different climatic, environmental, biological, physical, chemical, economic, historical, societal, political, and governance conditions prevail in different parts of the world and will lead to different designs for the best suited IMTA systems.[ii]

The Skimmer: Can you tell us more about the benefits of doing IMTA?

Chopin: Seaweeds are excellent nutrient scrubbers – especially of dissolved nitrogen, phosphorus, and carbon. IMTA takes advantage of the benefits of nutrients, which in moderation (i.e., within the assimilative capacity of the ecosystem) are co-products and food, not waste or by-products.

One way to incentivize mono-aquaculturists to move towards IMTA would be to allocate a value to the ecosystem services that seaweeds and other extractive species provide in addition to their biomass and food trading values. Much has been said about carbon sequestration and the development of carbon trading taxes. In coastal environments, mechanisms for recovering nitrogen and phosphorus should also be highlighted and accounted for in the form of nutrient trading credits (NTCs). Seaweeds are approximately 0.35% nitrogen (N), 0.04% phosphorus (P), and 3% carbon (C). If NTCs are valued at US$10-30/kg, US$4/kg, and US$25/ton for N, P, and C respectively, worldwide seaweed aquaculture (30.1 million metric tons) provides ecosystem services valued between US$1.1 to 3.2 billion. This is as much as 28% of their present commercial value (US$11.7 billion).

The value of this important service to the environment, and consequently society, is never accounted for in the budget sheets or business plans of seaweed farms and companies, however.[iii] Recognizing and implementing NTCs would give a fair price to seaweeds and other extractive aquaculture species.

Nutrient biomitigation is also not the only ecosystem service provided by seaweeds, and IMTA is more than a story of nutrients. For example:

In the recently published UN report “The Ocean as a Solution to Climate Change: Five Opportunities for Action” we show that seaweed farming could remove an additional 0.3 GtCO2e/year by 2050, for a total mitigation potential of 1.4 GtCO2e/year from the conservation, restoration, and sustainable management of coastal and marine “blue carbon” ecosystems such as mangroves, seagrasses, salt marshes, wild seaweed beds, and reefs. The report estimated that five ocean-based climate actions could deliver a fifth of the annual greenhouse gas (GHG) emissions cuts needed by 2050 to keep global temperature rises below 1.5°C.

Furthermore, with regard to economics, we recently published a paper that demonstrated that an IMTA operation is more profitable than salmon monoculture with a higher net present value (NPV) in all the scenarios tested. In addition, in regions where salmon production has declined in recent years, such as in Atlantic Canada, the crop diversification associated with IMTA could increase economic stability.

The Skimmer: In addition to nutrient trading credits, what else needs to be done to further develop and expand IMTA?

Chopin: Despite our recent findings about the profitability of IMTA versus salmon monoculture as well as other recent studies demonstrating the positive financial results of IMTA systems, the adoption of IMTA at a commercial scale in Canada and other western countries is relatively slow. Why? For starters, it always takes time for the knowledge acquired in academic studies to be transferred to industry, investors, and regulators. Economic studies of IMTA only span the past decade. Other barriers to the adoption of IMTA at present include:

For IMTA to expand dramatically in the western world, we need a number of things to happen. First and foremost, we need a major rethinking regarding the functioning of an “aquaculture farm”. We need to stop thinking about an aquaculture farm as something that operates within the limits of a few buoys arbitrarily placed in the water by humans or a few GPS coordinates on a map. While western IMTA has generally developed within the restrictive limits of existing finfish sites, this does not reflect the ecosystem scales at which aquaculture farms really function.

In addition, the mentality that nutrients are wastes or by-products rather than co-products useful for the co-cultivation of other crops needs to change. Different nutrients (i.e., small particulate organic nutrients, large particulate organic nutrients, dissolved inorganic nutrients) need to be recaptured, and different spatial and temporal strategies need be designed to do this. The “integrated” in IMTA should be understood as cultivation in proximity in terms of connectivity in ecosystem functionality, not absolute distance. This means that the different components of an IMTA system do not necessarily have to be at the exact same location (e.g., within relatively small finfish sites). Rather entire bays/coastal areas/regions (including marine protected areas) could be the units of IMTA management 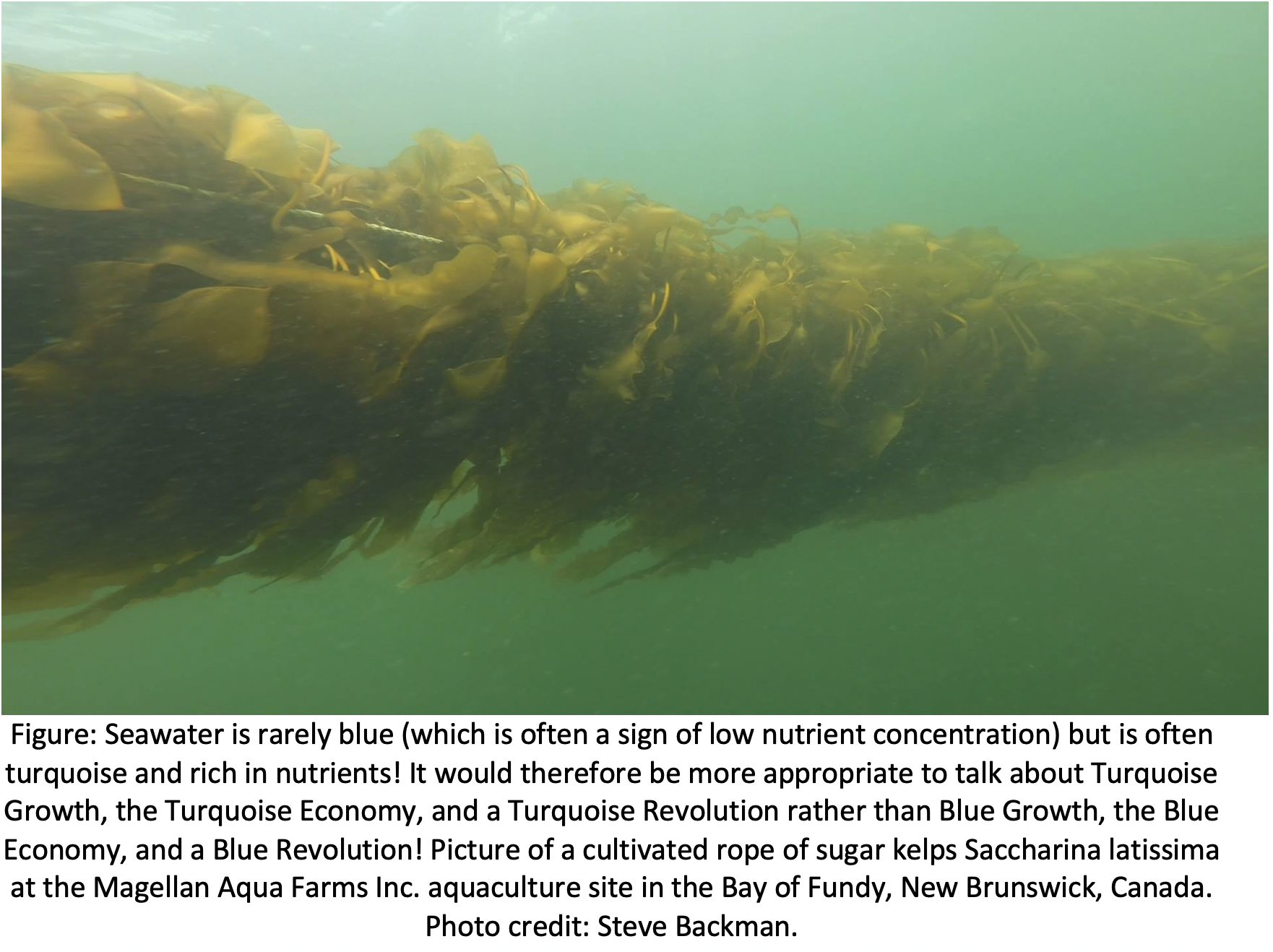 “Multi-trophic” refers to the incorporation of species from different trophic or nutritional levels in the same system. It is not enough to consider multiple species (like in polyculture) – they have to be at multi­ple trophic levels based on their complementa­ry functions in the ecosystem. Species selection, combinations, and proportions will be highly variable depending on the local conditions and biodiversity. The co-cultured species should be more than just biofilters; they should also be harvestable crops of economic value or potential. Moreover, nothing says that only one company should be in charge, producing all the IMTA components. There may need to be several companies coordinating activities within an ICAM.

Just like fisheries regulations, regulations governing aquaculture are often designed with a single species/group of species in mind and can inhibit a more holistic approach by not considering species interactions and an ecosystem-based management approach. Dialogue between scientists, aquaculturists, regulators, and other coastal stakeholders will be key to addressing regulatory hurdles and establishing enabling regulations and conducive societal conditions for the development and implementation of innovative practices such as IMTA.

IMTA: An ancient practice in Asia and very new in the western world

“IMTA can be traced back to the origins of aquaculture. In 2200-2100 B.C., the document You Hou Bin detailed the integration of fish with aquatic plants and vegetable production in China. There is evidence of Nile tilapia grown in integrated agriculture-aquaculture drainable ponds on bas-reliefs in tombs built during the era of the New Kingdom in Egypt, which occurred about 1550-1070 B.C.

"Between 500 and 1848 A.D. Ahupua'a integrated agriculture-aquaculture freshwater-to-marine farming systems were developed in Hawai'i.

“During the French Renaissance (~ 1600 A.D.), royal IMTA was practiced at the Château de Fontainebleau, as attested by the construction of the Etang aux Carpes (Carp Pond), which still functions to this day. French King Henri IV had given instructions that the estate should be self-sufficient and could not depend on provisions, which had the chance of being looted several times during the 65-km trip from Paris.

“In 1639, Nong Zheng Quan Shu (The Complete Book on Agriculture) by Xu Guangqi was published posthumously. He had been collaborating with Jesuit missionaries. His comprehensive treatise covered many topics, including irrigation and the rotation of fish and aquatic plant production. Also described were the integration of fish with livestock and the effects of manure on pond production, as well as the integrated production of mulberry trees, rice paddies and fish ponds.

“In the 1970s, John Ryther reignited interest in IMTA and can be considered the grandfather of modern IMTA for his seminal work on what he called “integrated waste-recycling marine polyculture systems,” first at Woods Hole Oceanographic Institution in Massachusetts, USA, and then at Harbor Branch Oceanographic Institute in Florida, USA.”

And in our recent interview, Dr. Chopin related a little more about this most recent development in the western world.

“In September 1995, I gave a presentation entitled “Mixed, integrated, poly-, or multi-level aquaculture – whatever you call it, it is time to put seaweeds around your cages!” at a conference in St. Andrews, New Brunswick, Canada. I could see a number of faces in the room saying, “What is this guy talking about?”!

“The period 1995-2000 was spent “preaching in the desert” for what was termed “integrated aquaculture”. We wanted to differentiate our practice from monoculture, and the obvious term was polyculture. However, cultivating three species of fish together constitutes polyculture but does not address the problems of co-cultivating three fed species together.

“In March 2004, at a workshop in Saint John, New Brunswick, we gave another name to what we were doing. I came up with “integrated aquaculture”, and Jack Taylor with “multi-trophic aquaculture”. We combined the two, and “Integrated Multi-Trophic Aquaculture” or “IMTA” was born. In the 15 years since, more than 1,300 publications referencing IMTA have been published worldwide.”

For a timeline of IMTA development in both Asia and the West, see here.

[i] Modern fish aquaculture developed in the 1970-80s, and invertebrate and seaweed aquacultures were added in the 2000s.

[iii] I would also note that the above calculations are based on costs of recovering nitrogen and phosphorus in wastewater treatment facilities and values often cited for carbon tax schemes. It is interesting to note that the value for carbon is per ton, whereas those for nitrogen and phosphorus are per kilogram. This suggests that there is more money to be made with NTC (between US$1.1-3.2 billion for N and US$48.2 million for P) than with CTC (only US$22.6 million for C).