MPA Perspective: Global Conservation Problem is in the Photos

Nowhere has the conflict been more evident than in the photos that adorned the Hawai’i Convention Centre, the venue for the 2016 IUCN World Conservation Congress.

In the foyer to the HCC were hundreds of photos of nature herself. Images of birds, fish and sea life. They were National Geographic-stunningly beautiful! I would have loved to take any one of them home to Aotearoa (New Zealand) with me.

As beautiful as these images were, there was something glaringly missing and it went to the heart of the debate.

In every single presentation, workshop and exhibition stand involving indigenous peoples, there were photos, too. Except the indigenous photos were contrastingly different. At the heart of their images were both people and place.

In indigenous cultures and beliefs, nature herself is human whereas the Western concept of conservation seeks to divorce the human element from nature. For a visual of what I am saying, check out the spectacular photography of local Hawaiian Kai Markell and compare this to what you find on a typical environmental NGO website. 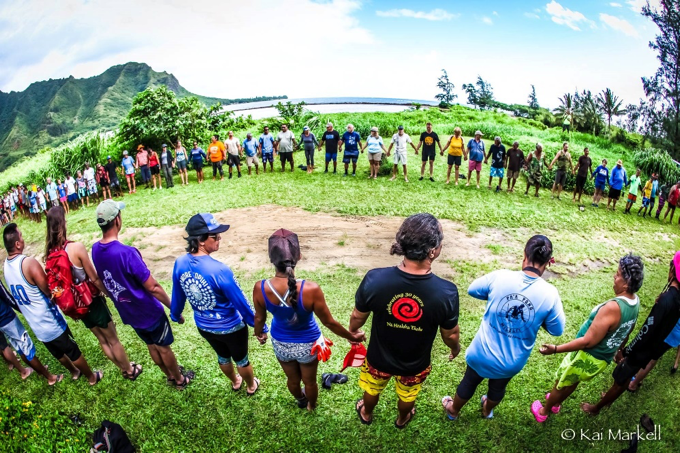 If you visited one of the indigenous stands at the HCC, you would see and hear indigenous phrases like, “Ko au te taiao. Ko te taiao ko au” – “I am nature. Nature is me.” “Āina momona” – “The fat abundant productive lands.” “Tangata whenua” – “People of the land.” The western approach talks of saving conservation from people. Yet for indigenous peoples, the people are both conservation and the solution.

Until this ideological conflict is acknowledged by the NGOs, colonial state governments and IUCN itself, there will forever be conflict and the beliefs and practices of indigenous peoples will forever remain inferior.

The remedy is not tinkering with external policy like Motion 53.* True sustainable resolution is only possible by getting down to the core of the matter. IUCN, as the global thought leader of conservation, needs to look in the mirror, inside itself at the heart and bones of its founding constitution. Its constitution is fundamentally flawed: it is racist to indigenous peoples, having been developed at a time when some indigenous peoples were enslaved.

IUCN talks of the importance of indigenous peoples and their critical contribution to global biodiversity protection, but it really is lip service. IUCN needs to continue to show leadership in this space by reviewing the problem lest indigenous peoples grow weary and look elsewhere for support — in other global conservation fora where their indigenous values, beliefs and definition of conservation are truly accepted.

* Motion 53 was the IUCN member motion designed to increase global marine protection targets from 10% to a minimum of 30% while also banning any fishing activity inside that 30%. The motion raised concerns for the indigenous fisheries tribes of Aotearoa because domestic implementation could require State confiscation of their Treaty and indigenous property rights, without free and informed consent. Furthermore, 100% of profits from tribal fisheries are used for community purposes. Motion 53 was adopted by IUCN members; however, the New Zealand Government abstained from voting on the motion.

The June-July 2016 issue of MPA News profiled a dispute between Māori tribes (or iwi) and the New Zealand Government over the latter’s plan to designate the Kermadec/Rangitāhua Ocean Sanctuary — a 620,000-km2 no-take area around the Kermadec Islands archipelago, located to the northeast of New Zealand’s two main islands. The Māori Fisheries Trust (Te Ohu Kaimoana), which represents all Māori iwi on fisheries matters, filed suit in March 2016 to block the designation, calling it an illegal confiscation of Māori treaty rights. In mid-September, the New Zealand Government formally delayed the MPA designation to allow more time for negotiations with Te Ohu Kaimoana to find a compromise. The negotiations are ongoing. More information is here.