Perspective: Building a network of MPAs and management on Western Danajon Bank, Philippines

Editor’s note: Liezel Paraboles and Wilfredo Campos are both with the OceanBio Laboratory at the University of the Philippines Visayas. Samuel Gulayan is with Bohol Island State University in the Philippines. Campos and Gulayan are co-leads of the project described in this piece.

Danajon Bank is the only double barrier reef in the Philippines and across Asia. Historically, this area likely had the richest coastal marine habitats among islands and shoals in Central Philippines (e.g., extensive coral reefs, dense seagrass beds, expansive mangrove areas), and was perhaps the region’s most productive marine area. But because of continuously increasing fishing pressure brought about by an ever-growing coastal population, marine resources in Danajon Bank have been heavily exploited for decades, leading to dwindling fish catches for small-scale fishermen. Thus several NGOs and government agencies have come in to address these threats to coastal marine habitats and the living resources they harbor.

One of the conservation efforts has been the establishment of MPAs. Because of the active participation of municipalities along its coast near the Danajon Bank coast, Bohol Island has 182 MPAs — more than any other province in the Philippines. The hope is that with proper management, these sites will result not only in biodiversity conservation but in enhancement to adjacent fisheries as well (e.g., higher catch with low fishing effort). Such MPA functions can be enhanced if individual sites are interconnected, forming both an ecologically functional network of sites and a knowledge-sharing network of MPA managers.

Hence, under the umbrella of ECOFISH (a joint Philippines/US program to enhance Philippine fisheries), a one-year project is underway to assist in networking MPAs in the Western Danajon Bank, to strengthen the MPAs’ management, and to train local partners in coastal habitat assessment and fisheries monitoring.

The project identified 14 MPAs across five municipalities (from Tubigon to Getafe in Western Bohol) to be included in the network. In determining which MPAs should be included, several criteria were used. These included physical criteria — e.g., MPA size, habitat condition, distance between MPAs, and surrounding hydrography — to identify existing MPAs that already functionally formed an ecological network. There were also managerial considerations like existing management structure, community and Local Government Unit (LGU) support, and need for management strengthening. 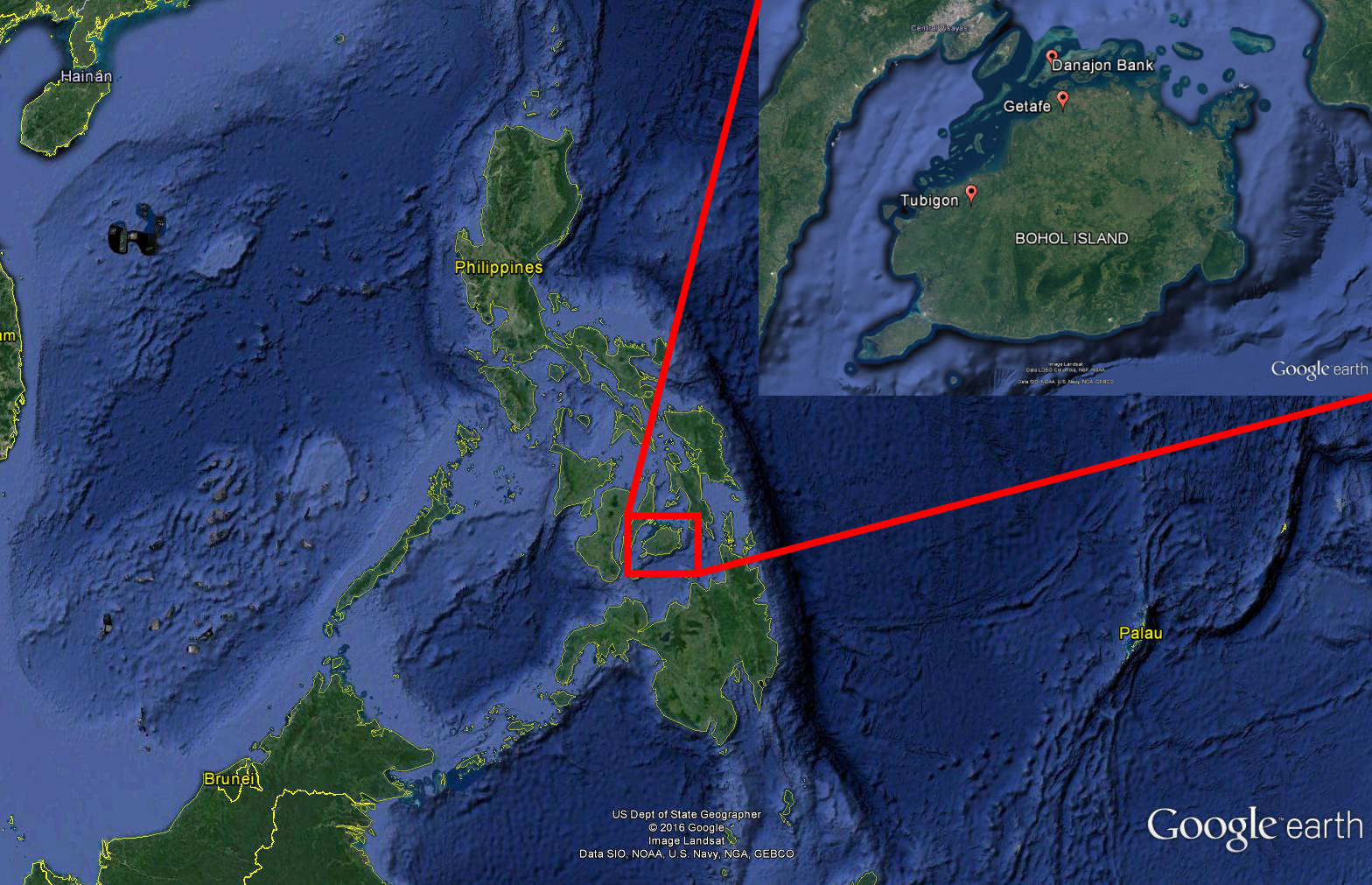 Figure: Map of Bohol Island and Danajon Bank. The project’s participating municipalities extend from Getafe to Tubigon. Danajon Bank extends from the northeastern end of Bohol down the western side past Tubigon, and includes the islets you see in that area.

A series of consultations, planning processes, and workshops was conducted to determine the current status of the identified MPAs and to formulate a five-year management plan for each site.

The project then formed a management organization for the MPA Network, including the election of officers. The Network organization follows the typical management body:  chairman, vice chairman, secretary, treasurer, auditor, and board members. But the management structure is unique from other MPA network initiatives in the Philippines in that it is primarily composed of stakeholders, not elected officials.

In the Philippines, local governance of approximately 70 provinces is by Provincial Governors. Each province is composed of around 50 municipalities, administered by the mayor and city council of elected officials. The jurisdiction of both land and water is under the city executive officials of the LGU. In typical coastal alliances for marine management in the Philippines, management is either by the local chief executive (mayor) who has the decision-making and policy-formulation position, or by municipal agriculture officers or fisheries technicians. The advantage of this traditional set-up is that LGU funds for operation of fisheries and MPA management are already controlled by these officials. However, because of the extensive responsibilities of these officials, MPA management is not always among their priorities. This has been a major obstacle for continued operation of coastal alliances.

In contrast, the management organization of the Western Danajon Bank MPA Network consists of villagers who directly benefit from, and are closer to the day-to-day operations of, each MPA and fishery area. As a result, the management of the Network is coordinated with the needs and concerns of people on the ground level. In support of this stakeholder-based organization, the project has ensured LGU commitment through resolution — a legal document institutionalizing LGUs’ support and funds to their own municipal MPAs and collectively to the inter-LGU MPA Network.

Although this project ends in 2017, we would like eventually to see a similar networking of management of all established MPAs in Danajon Bank.