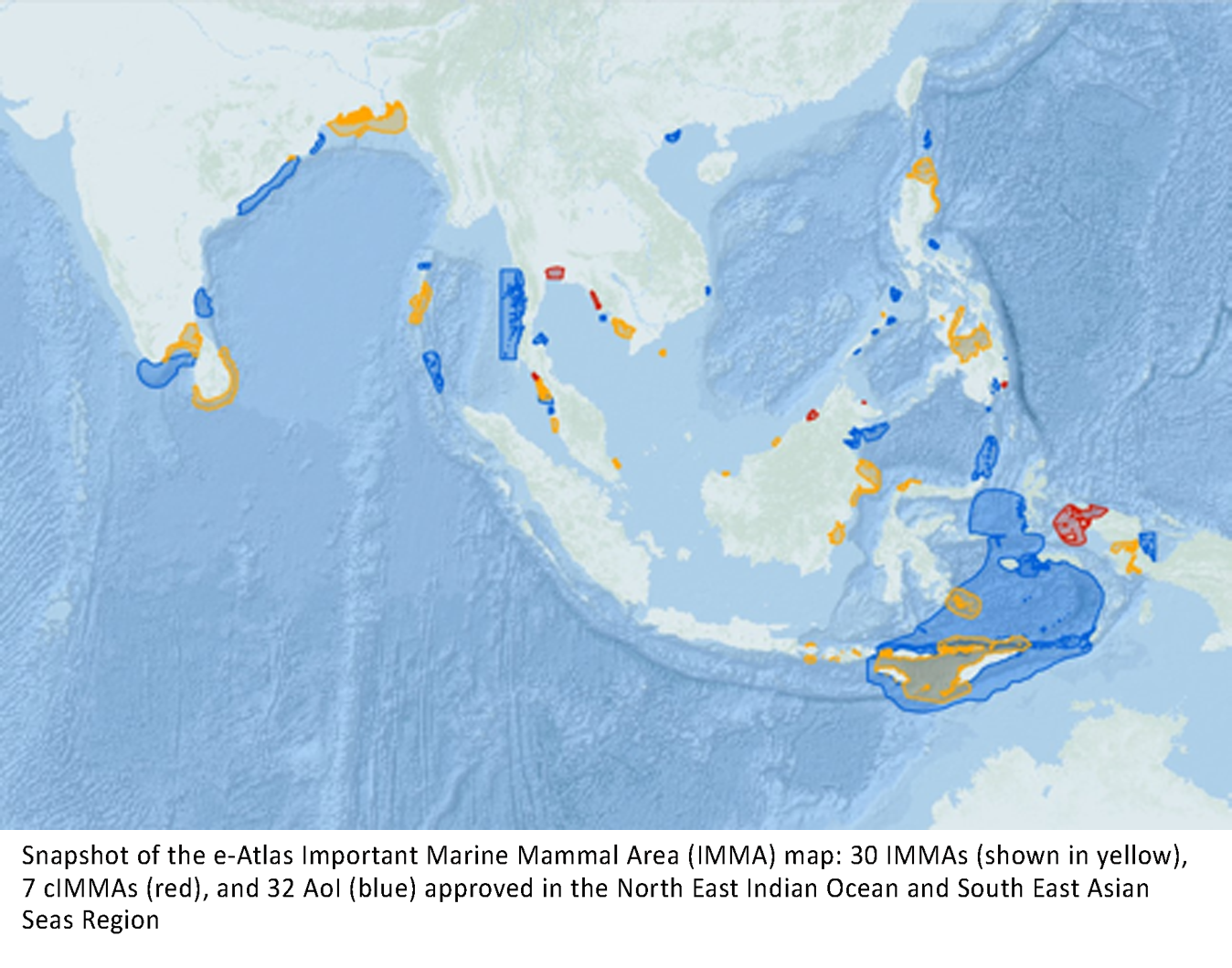 In late January 2019, the IUCN Marine Mammal Protected Areas Task Force announced approval of 30 new Important Marine Mammal Areas (IMMAs) in the North East Indian Ocean and South East Asian Seas Region. IMMAs are areas of habitat that are important to marine mammal species, and which have the potential to be delineated and managed for conservation. On a map, IMMAs are “marine mammal layers” intended to spotlight areas that may lead to MPAs or other conservation outcomes, such as ship route or noise reduction directives, and may be used in the course of marine spatial planning.

The new IMMAs include habitats from the Coastal Northern Bay of Bengal off Bangladesh with one of the world’s healthiest populations of Irrawaddy dolphins; to the Babuyan Marine Corridor in northern Philippines, an important breeding habitat for humpback whales; to eastern Indonesia and the Coral Triangle region for blue, Bryde’s and Omura’s whales, as well as spinner, pantropical, and other dolphin species.

In addition to the new IMMAs, 7 proposed areas in the region will remain as candidate IMMAs (cIMMAs) pending further research, and 32 habitats are considered areas of interest (AoI). For an IMMA to be finalized, it must pass the Task Force’s review process.

The newly declared IMMAs were the result of an expert workshop held in Kota Kinabalu, Sabah, Borneo in March 2018. Some 29 experts from 17 countries attended the week-long meeting. The final report of the North East Indian Ocean and South East Asian Seas IMMA Workshop is now available for download.

Later in 2018, in follow-up to the Borneo workshop and to implement one of the identified North East Indian Ocean IMMAs, the Task Force assembled an expert team comprised of six Indian and four international experts. Together, they traveled to the Andaman Islands off India to devise a strategy for implementation of a dugong IMMA in the Andamans as well as a diverse cetacean AoI. The report is here.

The five IMMA Southern Hemisphere workshops (2017-2021) are sponsored as part of the Global Ocean Biodiversity Initiative through the German government’s International Climate Initiative (GOBI-IKI). The other main supporters of the IMMA effort have been the the Mava Foundation (for the Mediterranean region) and the Agence Française pour la Biodiversité (AFB) through IUCN (for the Extended Southern Ocean). Other sponsors include the Tethys Research Institute, Whale and Dolphin Conservation (WDC), the International Committee on Marine Mammal Protected Areas, and the Eulabor Institute. The preparation of IMMA criteria and establishing support for the IMMA concept was funded by Animal Welfare Institute, Pacific Life Foundation, The Ocean Foundation, the US Marine Mammal Commission, Tethys, and WDC, among others.